What is the use of GROUPING SETS clause in Hive queries?

This is little bit rarely used clause but it has so many advantages. Knowing the functionality of this is very important because you may come across a situation in which you might need to use this. Along with this clause we need to know about few more clauses like Grouping function, Grouping__ID, Cube and Rollup.

What is GROUPING SETS clause? 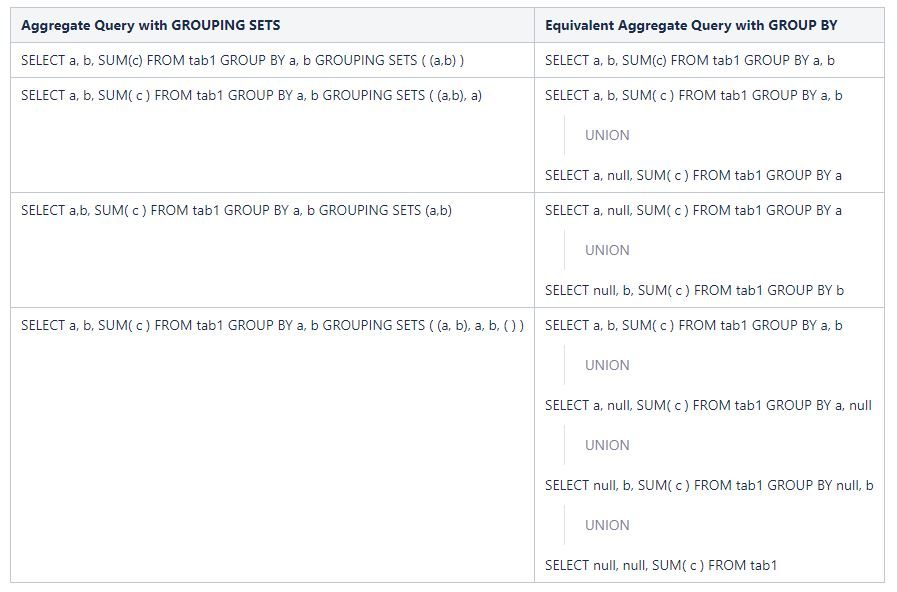 What is Grouping function?

The grouping function indicates whether an expression in a GROUP BY clause is aggregated or not for a given row.

(Please observe the double underscore in the above function.)

This is a function in SQL that is used to identify in which group the row is used in aggregation. GROUPING__ID will concatenate all the values returned by GROUPING function on the aggregations columns, perform binary to decimal conversion and returns the equivalent integer. You will understand this function when you look at an example that is mentioned below.

The above query produces the below result:

ROLLUP is a built in function that was built on GROUPING SETS. A typical query with ROLLUP looks like below:

This query is equivalent to below using GROUPING SETS:

CUBE is also an in-built function, which creates a subtotal of all possible combinations of the set of column in its argument. Once we compute a CUBE on a set of dimension, we can get answer to all possible aggregation questions on those dimensions.

This query is equivalent to below using GROUPING SETS:

Difference between CUBE and ROLLUP:

Below is the table that shows what are the aggregations will be performed internally by using GROUPING SETS() function when we call CUBE and ROLLUP functions on a set of columns: 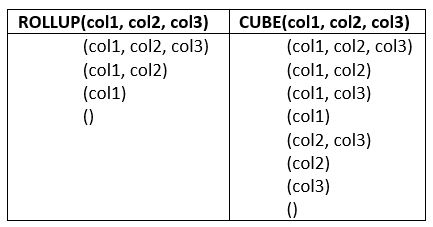 Please comment your thoughts about this post and also let us know if you want any topic to be covered on our blog.